Home › Mastering the Craft › Should Horror Stories Have Happy Endings?

Should Horror Stories Have Happy Endings?

“And will I tell you that these three lived happily ever after? I will not, for no one ever does. But there was happiness. And they did live.” – Stephen King, The Dark Tower

This question was posed to me by a friend on Facebook. Rather, it was posed to a group of people and like any other millennial, I commented giving my own opinion.

“It depends on the story,” I commented thinking at the time that I was truly wise in my posting. Plus I was the first one to reply so everyone had to get in line behind me like the slowpokes they were.

Then as the day dragged on, I say this because I was at work and therefore I was wishing I was home, the slowpokes began replying with their own comments. Some stated that horror stories shouldn’t have them while others shared my sentiment. With each comment mine, I started to think about mine a little bit more. Did characters in Horror stories deserve a happy ending?

So here is my thoughts about whether or not characters should get a happy ending. You ready? This may startle and bewilder some. Okay, here goes.

It depends on the story. And I’ll tell you why.

I’m a disciple of Stephen King. I’ve admired the man and his work since I read “IT” in the sixth grade. When I look at writing issues and concepts I look down at my beaded wrist band and say “What Would King Do?”

The above quote by King is about as good a quote as I can find that simplifies my answer. Happy endings do not exist in real life, #IRL as the millennials say. What makes that true in writing? Why should our characters receive a happy ending if we, the writers, cannot?

That’s right, the characters. But Jim, you might say, how can the characters do anything? Aren’t they fictional play things for authors?

Well yes and no.

If a writer is good, or in some instances lucky, than the characters they write will start to go against the plans that the writer has set for them. When this happens, the writer can either let go of control and allow the events play out, or they can force the characters into doing what is against their nature. You don’t put baby in a corner and you don’t force your characters into doing something that they would not normally do. The reader will tell when that happens and you don’t want a reader to stop reader and think about why that character did what he did. It takes them out of the narrative.

Now there are certain tropes in the Horror genre that has the scales set against them. Supernatural, paranormal, aliens, and other unnatural creatures and creepy crawlers all typically outclass the normal human being.

Take “IT” for example. The Loser’s Club consists of the six main characters when they were children. The book takes place in two separate times. Their past is explained in flashbacks that interrupt the main narrative at various times. In both time periods, The Loser’s Club has to battle the supernatural clown named Pennywise.

Now, #IRL, The Loser’s Club would be exactly like their club’s name 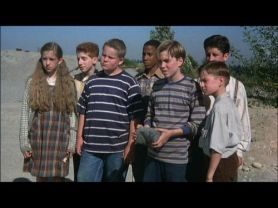 implies. They would lose, more chow for the clown. Of course, #IRL (Sorry for the hashtags I hate them but I’m going along with something) there would be no such thing as a god-like clown that preys on little children from the sewers of Derry, Maine. Of course, never having been to Derry I cannot confirm nor deny the existence of said clown.

Spoiler alert readers, the characters defeat the clown when they were children, but assume It is dead. In classic horror movie tradition Pennywise comes back to hunt down those that thwarted It. I won’t spoil the ending of the book because I’m not one of those dudes, but I would really encourage you all to go to the library and check it out. Haha, library pun.

The ending is a bittersweet one, neither good nor bad. In my opinion, the ending of a story really isn’t the true ending of the characters. There’s much more that happens to the characters after that certain storyline concludes.

Should horror stories have happy endings? No, because “happily ever after” should only really exist in fairy tales. Should horror stories have endings that leave the character experiencing happiness that they survived their ordeal? Sure why not. To deny your characters a happy ending even when they triumph is an act of an unloving god and if we, as authors, write with the sole purpose of torturing, crushing, and dominating our characters without the possibility of some kind of happiness at the end then there’s something wrong inside of you. Some anger that’s being taken out unjustly on the characters.

I’m going to get religious here because I just had a thought that I’m going to expand on. Take our own lives for example, imagining that we’re in some novel. The author of that novel is God. Now imagine if God gives us free will to do whatever we like, whenever we like. We live our lives making decisions that will ultimately lead us to the end. I’m not sugar coating things here folks, but we all die someday.

If you could get to pick an author to be God over us, who would you choose? King, Lovecraft, Michael Crichton? Maybe even James Patterson? What about a God that wants you to have a happy ending? I mean a truly, “happily ever after” type of ending?

“And there will be no more night; they need no light of lamp or sun, for the Lord God will be their light, and they will reign forever and ever.” – Revelations 22:5

Revelations is my favorite book of the Bible. I love the imagery of it all. As a horror writer, it has everything that most horror books have and more.It’s where the word apocalypse and armageddon are derived from. You can’t get past a day without hearing about a zombie apocalypse or some mashup of an ordinary word and Armageddon (stairmageddon for instance). You see the rise of a satanic dictator, the destruction of cities, the dead rising from the grave, the Four Horsemen of the Apocalypse, and even the judgment of man. 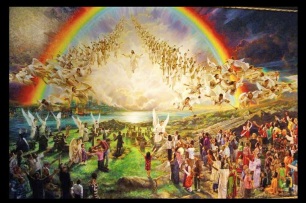 And through all of that, at the end, is Revelations 22:5. The best ending ever, if you’re a believer of God. If not then you’re going to be thrown into the Lake of Fire for eternity which doesn’t sound too appealing to me. I don’t even like swimming in a swimming pool. I’m not that great of a swimmer.

Guys, I think I’ve explained my point decently and this is rant is running a little long. At the end of the day, only the author can decide what ending to write. If I were a character in a book I would want my author to at least give me a fighting chance at deciding my fate. I think that everyone, characters or #IRL people, we all want to be happy and that we strive to obtain what makes us happy. Isn’t that what protagonists of stories do, strive to obtain their goals while overcoming overwhelming obstacles?

I mean, c’mon people, even George R.R. Martin writes a happy ending once in a…. wait, scratch that.