While perusing the book aisle of Wal-Mart one night, I was stopped by the cover of a horse mounted rider on top of a humongous dinosaur skull. The book was called Dragon Teeth. When I first saw it I thought that it looked like the cover of Jurassic Park by Michael Crichton. Then I noticed that the author of the book was in fact Michael Crichton. I both was intrigued and saddened. For those that might not know, Michael Crichton has been dead since 2008. Since his death, he has published three novels including  Pirate Latitudes (2009), Micro (2011), and Dragon Teeth in 2017. 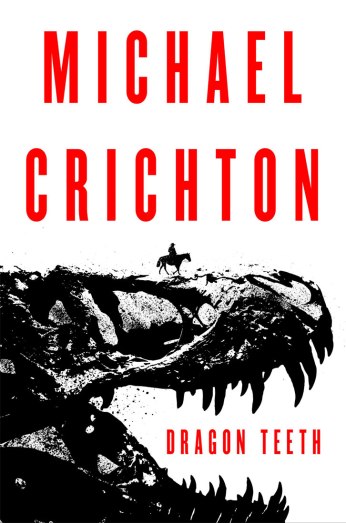 While Pirate Latitudes was very good, I was really let down by Micro. While Pirate Latitudes was found in manuscript form, it was still essentially completed by Crichton himself. In the case of Micro, this was not the case. It was found only roughly 33 percent completed and had to be completed by Author Richard Preston. While Preston is a decent author, Micro was still two-thirds Preston and not Crichton. And you could tell. So when I saw that Dragon Teeth had been published, I was a little more than nervous about reading it. The prospect of another tale about dinosaurs written by Crichton swayed me into placing it into my shopping cart.

When I got home, I started reading the book and found out that it wasn’t exactly another tale about the dangers of cloning dinosaurs and putting them in cages so that people might get to watch them. Dragon Teeth is a tale set during the Bone Wars in 1876 and centers around the rich and snobby Yale student William Johnson. Johnson talks his way into a bet that has him spending a summer with Othniel Charles Marsh, a professor and paleontologist. What Johnson doesn’t know is that Marsh is in a heated battle of his own against rival Paleontologist Edward Drinker Cope. Johnson must face betrayal, love, and even death as he attempts to survive his trip into the wild west.

What I love about this book is the amount of detail Crichton puts into each of the historical characters and settings he uses. Both Marsh and Cope were enemies in real life and did engage in the Bone War, a search for dinosaur bones. Along the way, Crichton also integrates other historical figures including George Custer, Robert Louis Stevenson, and Wyatt Earp.

The description that Crichton uses to describe the harsh sands or the way Johnson proves a murder is remarkable. It’s almost as if you are watching a documentary instead of reading a historical fiction novel.

The plot itself didn’t seem to lag either. Johnson was thrown from one predicament to the next and it always was entertaining trying to see how he got himself out of them.

The protagonist of the novel, Johnson, was one that I didn’t like at first. He was a snobby elitist that came from a family of money and wasn’t really keen on using his family’s riches to learn anything form Yale. Over the course of the story, you see Johnson grow as a person. You see him taking a stand in causes he believes in, learning an honest living, and what it means to be a man during the wild west. As a reader, you also transform from a reader that wants him to be killed off to a reader that’s rooting for him to get back home in one (more or less) piece.

Overall, there wasn’t much that I disliked about the novel. I would recommend this book for anyone that enjoys historical fiction as well as those that enjoy western books about gunfighting and treasure hunting.