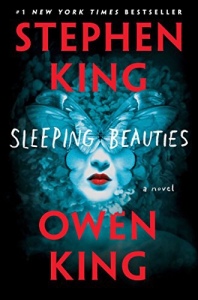 A small town is mysteriously the center of a supernatural event and their actions will effect the rest of the world. Sound familiar? If so, you’ve probably read some of the other works written by Stephen King. Throw in a virus that incapacitates more than half the worlds population, then you have a definite novel by the king of thriller and horror genres.

Sleeping Beauties is a novel that is co-authored by both Stephen King and his son Owen King. The storyline of the novel centers around the dilemma that all of the women that fall asleep in the stay asleep. When they fall asleep a cocoon is mysteriously woven across their faces. If the cocoon is disturbed in any way, the sleeping woman will attack the men around them. As the pandemic continues the situation grows dire for those women that are trying to stay awake.

As this happens, a mysterious woman walks into the town of Dooling, a small Appalachian town. Found by Sheriff Lila Norcross naked and walking in the middle of a road covered in blood, the mysterious Eve Black is taken to the county prison solely for women.

Another aspect of the novel that I enjoyed were the rich, detailed characters. There are a few main protagonists that have their own story arcs that crossover with other story arcs. Each of them are integral to the overall story and the characters are fleshed out so well that I was generally concerned with whether they lived or died. The antagonists receive the same loving tender care from the Kings. The only difference is that even though they are technically antagonists, readers will still care for their plights. The main antagonist, Frank Geary, does everything with his daughter in mind. He generally cares for his daughter and would do anything to get her to wake up safe and sound.

The one thing that I was disappointed with was the pacing of the novel. It begins with the characters in their normal day to day lives. Then the event happens and the females of the world, once asleep, never wake up. From there, the middle of the novel is split between the world of man and the world of woman. In the world of men, it’s all set up for the climactic battle at the end between those protecting Eve and those that are attempting to assassinate her. I won’t spoil what happens when the females fall asleep because it’s generally interesting and something that I found extremely intriguing. However, I felt that the middle of the novel was too long. As a reader, my favorite sections were the beginning and the end.

In the long list of books in Stephen King’s library, this is not the best. It is not the worst either. If you are interested in reading an average novel by the two Kings, then reading this book would be a safe bet.

My Tweets
Join 2,894 other followers
Follow The Writer's Apocalypse on WordPress.com