Home › Mastering the Craft › Can your bad guys be… “good?”

Good and evil, night and day, black and white, chess and checkers, Stephen King and James Patterson, and chutes and ladders. Everything in life has an opposite. Since authors write stories that model real life, even stories have that opposition inside of them. One such example is the good guy/bad guy relationship. I guess technically I should be referring to them as the protagonist (the hero) and the antagonist (the villain).

Since I’ve been on this kick over the last few weeks about what makes a “good” story, I thought that I’d write a column about what makes a “good” antagonist. Every story that has a protagonist, must have a rival, someone that will test and possibly defeat the hero of the story. In the last series of columns I wrote, one of them detailed the fact that the hero needs to face increasing obstacles right up until the climax of the story. Well, ideally, the antagonist would be the one that provides these challenges. The reason for that is that the antagonist is the opposite to the protagonist in terms of objectives.

“This is the character who most stands in the way of the hero achieving his or her out motivation,” states Michael Hauge in his book Writing Screenplays that Sell: The Complete Guide to Turning Story Concepts into Movie and Television Deals.

Hauge goes on to say that the antagonist, he calls it the nemesis, doesn’t necessarily have to be nefarious individual. “A nemesis can obviously be a villain but might also be an opponent, a rival, or even a good guy, as long as the character is somehow standing in the way,” he writes.

On a side note, this book is amazing. Even if you never plan on writing a screenplay it’s something every writer should read. You can find it here.

There are millions of examples to choose from, but for some reason my mind always sneaks back to the Marvel Cinematic Universe. Don’t worry late comers to the MCU, I won’t spoil the plot of Avengers: Infinity War (2018). I’ll just spoil the plot of Thor (2011). If you haven’t seen it (like my friend Ben) by now then it doesn’t really matter because you probably won’t see it anytime soon.

Really, all you need to know about Thor is that he is the opposite of Loki in just about every way possible except for gender (interesting factoid, in the comics Loki does turn into a female). Thor is strong, blonde hair, courageous, muscular, Asgardian, says what he means, and destined to rule his world of Asgard when his father (Odin) dies. Loki is weaker than Thor, dark hair, cautious, is proved to be a Frost Giant and not an Asgardian, manipulative, and is not designed to rule his people.

The hero and villain of Thor grow up together and are told that they are brothers. In fact, they form a brotherly bond that lasts till Avengers: Infinity War even though Loki constantly betrays Thor. The thing that causes them to part from the same path is that both Thor and Loki desire to be the ruler of Asgard when Odin dies. This is what turns Loki into the villain. While Thor is trying to do what his father wishes, Loki manipulates his brother into disobeying Odin causing the king to exile Thor until such a time that he becomes worthy of wielding the power of Thor’s hammer.

Another element to a “good” bad guy is the need to humanize the villain and make the audience sympathize with the character. Loki was meant to die at the end of Thor. Because of the reception he received from the fans, they brought him back for the first Avengers movie. One element to that fandom Loki created was due to Tom Hiddleston, the actor who played Loki. The second element was the way the writers created the character.

The last thing I’ll touch on is that even though there isn’t an obvious antagonist, it doesn’t necessarily mean that the antagonist around. Some of you might be reading this and thinking “But Jim, what about zombie movies and books? Can the zombies be the antagonists?” Technically I suppose. Zombies like to eat human flesh and the humans don’t want their flesh eaten. However, If the zombies are the bad guys, they’re probably sentient undead like in the film Dead Snow (2009). Since we’re talking about “good” bad guys, zombies will most likely never be the antagonists. Why? Because they can’t be humanized. No one is going to want for the zombies to win. The late George Romero was inventive when he directed his zombie films and knew this. That’s why the antagonist is always a living human opposing the morality of the protagonist. In Romero’s films, the zombies were simply the event that causes the two parties to come into conflict. 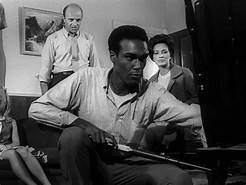 Night of the Living Dead (1968) wasn’t about how to defeat the undead. The main conflict was between Ben (front) and Harry (standing behind Ben).

Now, some of you might be thinking “But Jim, you didn’t even mention films like Sharknado (2013) where the shark infested tornado is the antagonist.”

I didn’t mention that because we’re talking about “good” antagonists.

Like Loading...
‹ Step Three: Add just a pinch of detail and description
Review of “Twilight of the Living Dead” ›