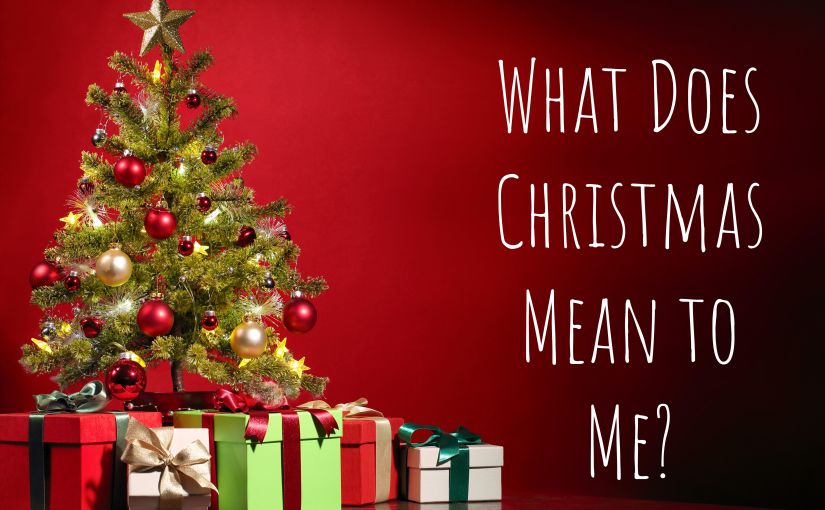 As an editor for a weekly county newspaper, I was tasked with collecting essays for one of the city’s contest. The contest challenged children to write an essay. The winner won the right to turn on the city’s Christmas tree lights during their annual celebration. The theme was: What does Christmas mean to me?

The answers were very heart-felt and had a common theme. Family, friends, gift-giving, and the birth of Christ were the most common examples of the types of essays submitted. That got me thinking about it too. What does Christmas mean to me?

When I was a child, Christmas meant two things: food and presents. We always had this tradition that we would have Christmas Eve dinner. My Grandfather would buy these sausage links that were just delicious and we’d have ham to go along with it. Afterwards,  we’d open up presents that were from the uncles, aunts, and grandparents from my mother’s side of the family. Then the kids would go to sleep and the parents would spend the next few hours finishing their gift preparation.

On Christmas day, my sisters and I would wait on the upstairs landing patiently until my parents would call us down to open presents. After that, we all piled into the car and drove down to Grandma and Grandpa’s on my father’s side of the family for a huge party of gift giving and food.

As I grew up, the amount of gifts I received decreased, but the amounts of gifts I gave increased. As my sisters married and they had children of their own I started to relive my love for toys. I also discovered that giving gifts is typically a better feeling than getting them. Let me tell you, being an uncle is fantastic because you can buy the most annoying and loudest gifts for the kiddos and you can just saunter off at the end of the night.

Things changed when I married my wife. She was nuts about Christmas. So much so that she themed the marriage ceremony around it. Christmas in July. We were married in front of a Christmas tree and everything. For seven wonderful years, my wife and I spent each year celebrating with family and friends.

Two years ago, my wife left me. To make a long story short, it was all my fault. That was the first Christmas that I wasn’t filled with Christmas cheer. The last thing I wanted to do was sing carols, drink eggnog, and open presents. I still did it though. I went through the motions and put on a brave face, but it felt like I was dying a little on the inside. A great big chunk of my soul had been ripped out. Or at least that’s what it felt like. I’m not sure if anyone around me knew I felt like that. I suppose if they read this then they’ll know.

The old, cliched line says that time heals all wounds. Some wounds don’t always heal properly and they leave scars. One of the reasons why I took my seperation so hard was that I swore I’d never go down that road. When my parents divorced I was in elementary school. To say that it crippled my family is an understatement. I had made a promise to myself that once I was married, I’d do whatever it took to stay married. Have you ever read Oedipus Rex? It’s about a king and a queen that have a kid. The kid is prophesied to kill the king and marry the queen. So do you know what the parents do? They try to kill the kid, except that didn’t work and the kid grows up to do exactly what he was prophesied to do.

Ironically, sometimes the steps you take to prevent certain things from happening actually causes them to occur.

The year after my wife had left, the second Christmas without her, things were bad but they weren’t like that first year. I still didn’t feel like my Holly Jolly Old Self. That was in 2017.

In 2018 I lost about 100 pounds. I decided in late 2017 that I would improve my physical health. My wife and I divorced. It’s been a challenging year.

When my wife left I’d just about given up on life. It was, and most likely will remain the darkest period of my life. I’m not just being dramatic either.

At that time, I didn’t want to attend church anymore. For a variety of reasons. Mainly, I thought that people there would look at me differently or whisper behind my back. My wife was more social and active in the church than I was so I believed that while she’d be missed, I wouldn’t be.

I know that she was and is still missed, but I was absolutely wrong when I thought no one would miss me.

There were so many church members that reached out to me. I formed new friendships and strengthened ones I already had within the church. I became involved in some of the church programs. It was like I was given a second chance.

Just take a look at the human race. We got ourselves kicked out of the Garden of Eden for disobeying God and he gave us another chance. We nearly all died in the Flood because of all the corruption and violence we caused, but God saved Noah and his family.

“For God so loved the world that He gave His only begotten Son, that whoever believes in Him should not perish but have everlasting life. For God did not send his Son into the world to condemn the world, but that the world through Him might be saved.” – John 3:16-17.

About 90 percent of us know the story from various Christmas songs and Hallmark movies. Jesus was born from the Virgin Mary and died for our sins upon the cross. He didn’t come into the world to condemn, but to save. To offer yet another chance at salvation.

I am thirty-three years old. When I think about Christmas, my mind doesn’t wonder about what gifts I’m getting, what my party plans are, or whether or not Die Hard (1988) is an actual Christmas movie. It’s not by the way.

One thought on “What Does Christmas Mean to Me?”