The Legends of Luke Skywalker

Ken Liu writes an interesting anthology of tales that center around the myth of Luke Skywalker. The story is centered around some passengers on a transport barge on its way to Canto Bight. If you’ve seen the film Star Wars Episode VIII: The Last Jedi (2017) then this destination will be familiar. In fact, it really shouldn’t be a surprise because the book is included in part of the “Journey to Star Wars: The Last Jedi.”

To pass the time, the passengers tell tales of Jedi Master Luke Skywalker. This novel falls between Episode VI and Episode VIII as far as the timeline.

The first thing that I enjoyed about this book is the structure in which it was made. There are six stories about the Jedi Master with interludes in between. Also, the edition I read had fully colored illustrations of the story about to be told that were beautifully drawn by J.G. Jones.

The next thing that I enjoyed about the book was the fact that not all tales about Luke were true. Told by many different characters, the tales of Luke and the Rebellion vary from being saviors of the galaxy to just a bunch of con artists as told in the short story “The Myth Buster.”

If you’re a fan of Star Wars but have never really delved into the cannon/non-cannon books, then this one might be the one to try out. This book is considered cannon, but like I said earlier don’t really count on the legitimacy of what’s being said about Luke Skywalker. 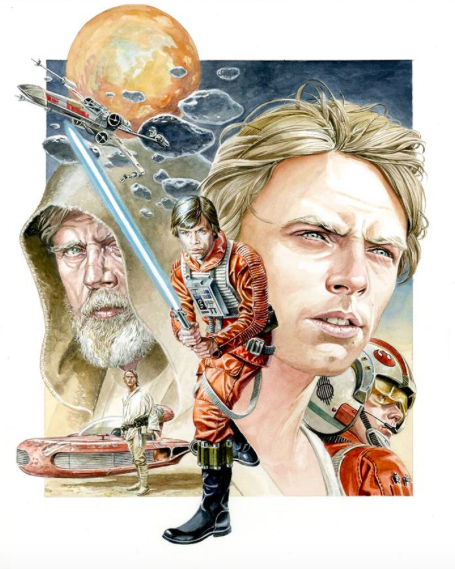 Just one example of the artwork in this book crafted by Artist J.G. Jones.

Overall, the book is great in terms of writing. Author Ken Liu does an amazing job crafting these stories and making each sound different in terms of the tones of the narrator that’s telling them. My favorite story is at the very end. It’s titled “Big Inside” and is about Luke and the narrator being trapped in the belly of gigantic monster. In order to get out, Luke and the narrator must accept the sacrifice from another trapped group. “Big Inside” contains the most wisdom in the anthology stating that:

“It was one thing to sacrifice yourself for something you believed in, but how much heavier was the burden of accepting someone else’s sacrifice?”

The genius of this concept for a Star Wars book is that since each story is told by different people, nothing can be considered “true” even if Luke did the things that he did in the book. The writing trick of “the unreliable narrator” is used here to make the reader ponder what really happened in each tale.

As far as what I didn’t like about the book, there wasn’t much. If I had to nitpick and find one negative in this book of positives, then I would have to say that one of the stories dragged on and didn’t really capture my attention. “The Tale of Lugubrious Mote” was about the true brains behind the comedic genius in Jabba the Hutt’s palace. That story didn’t quite accelerate until Luke showed up which wasn’t until thirteen pages into the story.

This book can be read by children of all ages. As far as swear words, I didn’t catch any. If you’re looking for a Star Wars book that doesn’t really add to the canon of the films, but does provide some good tales to read then The Legends of Luke Skywalker written by Ken Liu is your book.

If you’re wondering whether or not to purchase the book in hardback or ebook, I would recommend hardback. There is not a book sleeve on it and therefore is just a glossy cover, but the book is extremely durable and has a great feel to it.

Like Loading...
‹ Writing Myths: “It’s such an easy gig.”
My newest book release and following your gift ›