So, it’s Father’s Day Sunday. If you’re reading this on Sunday or sometime afterward, then it is and it was Father’s Day today or Sunday. There, I’ve covered all my temporal bases. First off, happy Father’s Day to all those dads, fathers, papas, grandfathers, granddads, grandpapas, and all of the other monikers one could attribute to a patriarchal figure.

Secondly, due to the fact that it is/was/almost Father’s Day, I’m going to be talking about two men that have greatly influenced my life. Don’t worry, since this is Mastering the Craft it’ll have something to do with reading and writing. Wouldn’t want to change lanes on y’all.

When I was young, I’m talking like sometime between third and fourth grade, I got in trouble. In fact, I was in so much trouble that my mom issued that age old cliche “just wait until your father gets home.” I don’t recall what I did, but what I do remember is that feeling of dread as I waited on the front porch for my father to come home from work. Dad was always in a bit of a foul mood when he came home so my transgressions (whatever they were) were going to be met with extreme prejudice. Or, that’s what I had thought at the time.

When he pulled into the driveway, I imagine my heart was racing and I was imagining the worst. Walking up the steps to the porch, he sat next to me and told me I was grounded. When I asked, timidly, for how long he handed me a smaller hardcover book. The cover was glossy and had three boys on a boat looking up at the house on the cliff, which just so happened to be the title. 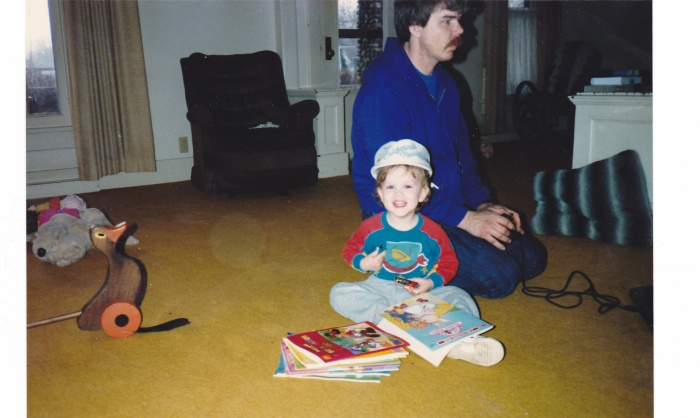 Apparently I liked books even at a very young age. My Dad (behind me) and I both share a love of video games. He’s playing the Atari.

“They didn’t have the first one, so I got the second one,” my dad had said.

It was number two of The Hardy Boys series. They were a children’s detective series sort of like Nancy Drew, but with two brothers who had a dad that was a detective.

My dad said that I had to read the entire book before I could be ungrounded. Now, up until that point in my life I don’t think I really enjoyed reading. Then I traveled with Frank and Joe Hardy. First they solved the mystery of the house on the cliff, then we backtracked to the first one where I helped the boys figure out what was happening in their debut adventure, The Tower Treasure.

Whenever I finished one book, my dad would bring home another.

Soon enough, I was reading those Great Illustrated Classic books. You’ve probably seen them before, they were shortened and summarized versions of classic literature with a picture on every other page. Even though I probably could’ve read the actual books, I wanted the illustrated ones because I could easily devour them and count them for the BOOK IT! Program. Hey, when you get rewarded for the amount of pages you read with Pizza Hut personal pan pizzas you learn how to cheat the system.

Later in life, in high school, dad would take us to Goodwill when they held their half-off Saturdays. Dad likes to bargain shop and back then, those Saturdays would entail going to multiple Goodwill’s in the area looking for deals. The cool thing about half-off Saturdays is that most Goodwill’s have a large selection of books. Dad would allow me to pick out as many books as I wanted. When hardbacks were $1 and paperbacks were 50 cents, you could allow your kid to spend $5. Grisham, King, Patterson, Rice, Ludlum, Clancy… the list of authors I had my pick from was almost infinite. My reading tastes expanded with every trip.

The second reading role model was my grandfather, Jim Norton. My parents divorced when I was in elementary school and my grandfather would drive from Osceola to North Liberty once every three weeks to pick me up. We’d drive to Mishawaka and we’d get a haircut and then dinner. After that, we’d drive over to Borders or Barnes & Nobles to peruse the books. On the way home, we’d talk about our purchases.

Grandpa liked to take me to aviation shows. This one was a surprise though. He wouldn’t say where we were going and honestly, I’ve never seen him so excited about one of our trips. He surprised me with a trip on a 1930 Plymouth Trimotor in Elkhart. It was amazing.

Grandpa Norton didn’t read fiction. His tastes in literature was mainly non-fiction, specifically wars or general history. He had a few exceptions though. He thoroughly enjoyed Sherlock Holmes, the Bob Lee Swagger novels (written by Stephen Hunter) and the Aubrey-Maturin (Master and Commander) series.

When I was in college, we’d make it a habit to go out for lunch/dinner and then to a bookstore we’d never visited before. He would have loved Half Price Books in Mishawaka. I would like to think that if Grandpa was still alive, he’d have my books in his collection. I don’t think he’d have read them (they’re fiction), but he would have displayed them proudly.

There have been other literary influencers in my life, but without these two magnificent fathers in my life, I might not be writing this weekly column. So, in observance of Father’s Day, I’d like everyone to take a moment to appreciate the fathers in our lives and the impact they had on us.